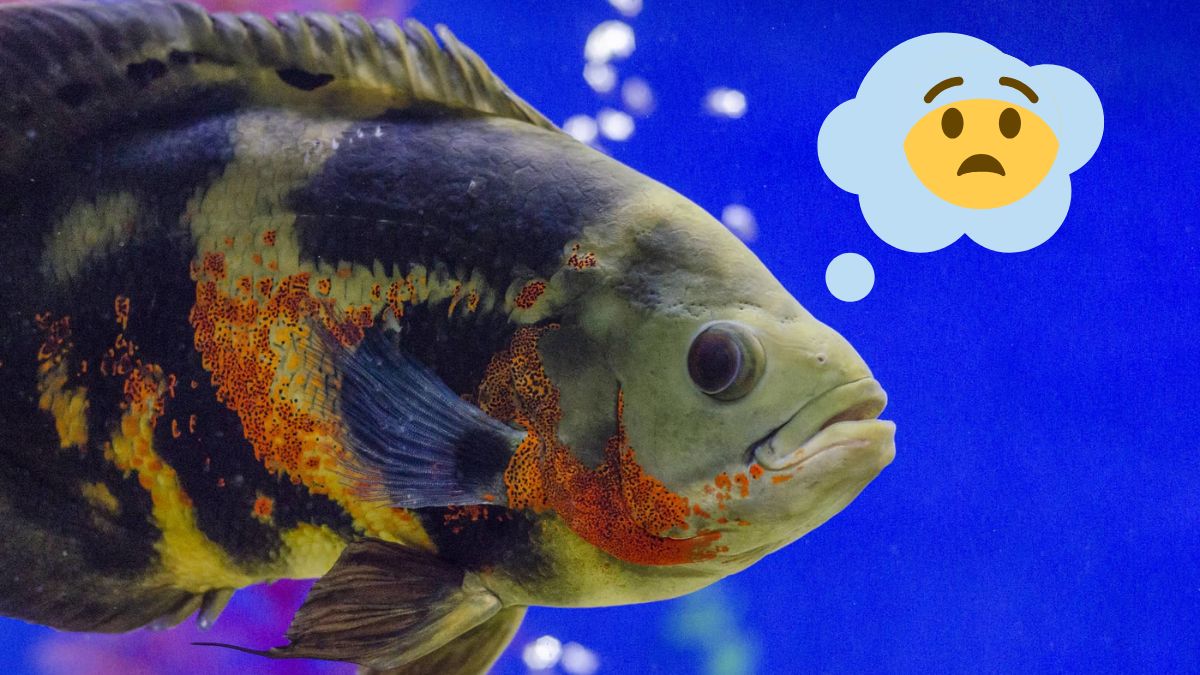 There’s no denying this fact.

But it’s also true that they rarely keep them with other aggressive fish.

In case you’re brave enough to do so, there are dozens of real-world examples proving how two aggressive fish can wreck your fish tank.

On top of that, your life will be significantly affected.

One thing you need to understand is Oscars are predatory.

Without specific tank rules, they’ll eat their smaller tank mates, and you wouldn’t be able to do anything.

So, as far as the answer to the question ‘What fish are Oscar Afraid Of’ is concerned – They aren’t afraid of any fish species.

Oscars would do everything they could to maintain their territory in the fash tank.

Thus when you keep an oscar fish with a similar aggressive fish, they will never stop fighting for their territory. If you leave this major con out, with other aggressive fish around, Oscar Fish will find it hard to attack other smaller tank mates.

So, unlike my Oscar Tank Mates recommendation, either avoid the following fish species or use them strategically to keep Oscar Cichlids in check.

If you want to avoid this face-off, it’s better to keep them parrot sharks with other big fishes, Pearsei, Synodontis, and Plecostomus.

However, before you do that, make sure to accommodate in a larger fish tank.

Be cautious If you want to add an Oscar fish instead of the 3 parrot sharks I recommend. If not handled carefully, this situation may lead to disaster with the two extensive fish fighting for their survival.

Oscar Cichlids, and African cichlids, are all known to be territorial, and the texas cichlid is no exception.

So, with that in mind, you should always keep them in a large tank. But, unfortunately, by doing so, you’re allowing Texas Cichlids to establish their territory.

As long as a Texas Cichlid is living SOLO, you can keep them in a recommended 55-gallon tank. However, they’ll need extra space when keeping them with recommended Texas Cichlids tank mates or a similarly aggressive fish.

Although a 125-gallon fish tank is enough for you, anything above 145 gallons would be the safest bet to control Cichlids’ aggressive behavior.

There are two main types of hostility you can see in tiger barbs. First, tiger barbs often establish a social hierarchy amongst their tank mates well within the context of their respective schools.

Tiger barbs often establish a social hierarchy amongst their tank mates well within the context of their respective schools. You’ll always see males sniping and chasing one another to advance their social standing.

You’ll always see males sniping and chasing one another to advance their social standing.

This increases the likelihood that they will attack other, less powerful fish in the aquarium.

Despite Tiger Barbs’ vicious attack, they rarely kill their tankmates instantly. Still, don’t rule this out. But Tiger barbs rarely cause instant death.

When kept in an aquarium containing tiger barbs, slower, shyer fish may go hungry since the frenzied barbs will eat everything in sight. Similarly, you should never keep tiger barbs alongside long-finned fish like angelfish or bettas.

Long-finned fish are too appealing for tiger barbs to ignore, sometimes in big schools, derailing their aggressiveness. Besides, the non-stop fin-nipping can cause a fatal infection known as fin rot in your fish.

Because of their aggressive temperament, Bucktooth Tetras have no place in a community aquarium.

Besides eating other fish, they also steal their fins and scales. Besides, don’t expect them to socialize with fish other than their species.

The tetras are not predatory, but when it comes to eating, you can find them chewing on anything they can get in their mouths. (This includes even their tank mates).

Bucktooth Tetra’s craziness for flesh is primarily why the smaller Bucktooth Tetra is often scared away by these fish when they charge for looking out for their food.

This behavior involves feeding the scales and has another distinguishing feature: a preference for either left or right hand.

It appears that members of this species always have a slight tilt. During attacks, Bucktooth snaps at other fish’s scales, then proceeds towards their tail.

Except in huge tanks, I would not recommend mixing Bucktooth tetras with a predator fish such as Oscar Fish.

Ask any aquarist; they will say the same thing.

Frankly speaking, they’ve their own decision behind this.

Despite all the reasons behind African Cichlids’ popularity among aquarists, their home aquarium mainly turns into failure because of your Inadequate preparations.

As you may already know African Cichlids’ aggressiveness, you must accommodate the necessary preparation.

This hostility can’t be eliminated (who wants to? ), but you can mitigate it so that half your tank will not be empty when you arrive home.

Here’s how you can control their aggressiveness:

Black Wolf Fish is aggressive, but don’t compare them with an oscar fish or some other hyper-aggressive fish.

That being said, when Black wolf fish grows up, they become considerably more dangerous than their younger self. So it’s best to keep these predators away from any tranquil, little fish species you might have.

These fish-eating creatures are not new to you. But, in contrast, they rarely actively pursue and successfully capture their target.

You may also observe that Black wolf fish often protect their fish tank in tandem with a partner. Although effective when combined, they also function efficiently independently.

The Black wolf fish is known to hang out at the tank’s surface. This is just something they do instinctively.

But it would be best if you didn’t rule out the possibility of them having their favorite spots.

Besides Black wolf fish hanging out at different spots, they’re known to be excellent jumpers.

So, when keeping them in your aquarium, you must ensure the lid is secure. Otherwise, Black wolf fish may jump out of your fish tank.

Additionally, being cyclical means, you will likely only observe them actively swimming during the day.

As for the black wolf fish, if provoked, they can fight to the death, which is why they are so dangerous. Therefore, getting to know their habits before adding them to a tank is much more crucial than you can imagine.

As Jewel cichlids are known to be aggressive aquatic pets, they can give a serious challenge to your Oscar Fish.

Despite their high level of aggression, you can provide them the adequate care they deserve.  Some aquarium keepers even insist they do well in groups.

However, the cautious among you will generally want to steer clear of this.

By learning about their hostile and competitive behaviors, you may provide them with the ideal environment.

Here are some things to remember:

Well, you can think of it as a fluke.

Even though most online aquarists claim to have no problems keeping jewel cichlids with some of its recommended tank mates, that’s not the case with everyone, as some users have had first-hand experience of their aggressive behavior.

That’s why I don’t suggest Jewel Cichlids for shared aquariums.  There’s too much chance that they’ll hurt or kill one of the other residing fish.

The former will turn out even more aggressive when comparing a red devil Cichlid with an oscar fish.

So, what would happen when you keep them together?

As a predator, Oscar Fish eats anything smaller in their tank and likes to dominate a similar aggressive fish. However, this is thrown out of the way when you keep a red devil cichlid and oscar fish together.

Do you’ve any idea WHY?

The word devil in red devil cichlids early defines their personality as they can give a real hard time to an Oscar Fish. Despite reading this, you won’t be lucky for too long if you’re still planning to keep them together.

So, when time runs out, you’ll find no choice but to separate them for good.

Similar to Oscar Cichlids, Doviis are exceptionally terrestrial and hostile.

When Dovii Cichlids reproduce, they become much more aggressive.

Wolf cichlids have razor-sharp teeth and could bite you if they feel threatened by your hands or cornered while you’re working in the tank. That feels scary. Isn’t it.

Besides, if you’re not safe, why would anyone add them in a fish tank with an equally aggressive Oscar FIsh.

Given their size and strength, you should only house them with other large, robust fish species.

Many aquarium owners avoid keeping the Doviis with other fish.

The Cichlid will eat anything that isn’t strong enough to survive in its environment.

The Dovii Cichlid has an extremely high intelligence level. So, if you ever decide to isolate them, make sure to keep them entertained.

You should be ready to lose most of its tank mates without good entertainment.

Last but not least, Midas Cichlid is another fish species that effectively challenges Oscar fish in a giant tank of up to 200 gallons.

If not placed with similar fish or other cichlids, they will destroy the aquarium, and you wouldn’t be able to do anything to protect its tank mates.

As a result, they pose a significant danger to slow-moving, placid organisms like shrimp, crabs, snails, and even quasi-fish plants.

Big Plecos, Oscars, and Jack Dempseys are all excellent choices for tank mates. Nonetheless, add them only in a large fish tank starting from 200 Gallon.

Even if you feel like starting your aquarist journey with an Oscar Fish, you’ll begin to have difficulty keeping it with either of these 10 aggressive fish in your home aquarium.

So, whenever you feel like this, the best choice is to separate them into two individual fish tanks.