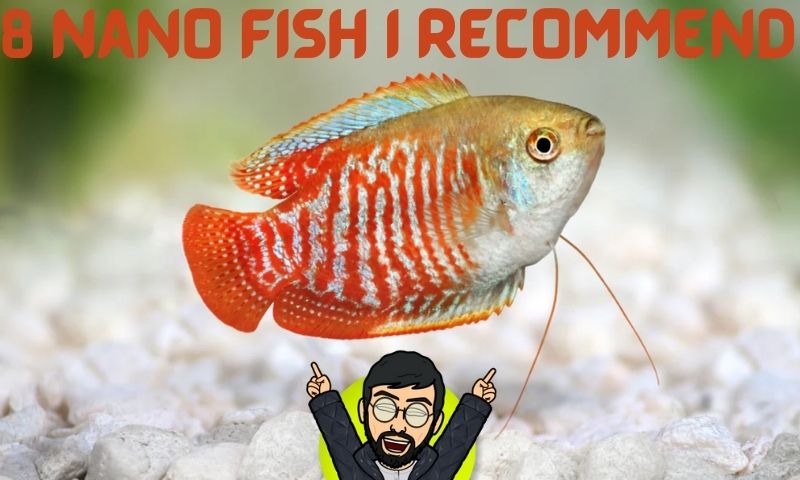 Have you ever watched Nemo swim around the ocean and dreamed of having a clownfish of your own?

If so, why not get a nano fish for your aquarium?

But, mind you, Nano Fish are common beginning fish for hobbyists because of their ease in care and small size.

Some of the famous small and friendly fish includes:

If you’re looking for a small fish that can add color, activity, and companionship to your tank, the best nano fish is the Zebra Danio.

This little beauty gets along with virtually all other fish and is available in several attractive varieties. It has a beautiful blue striped pattern that will add vibrancy to your aquarium, and the stripes are evident when the fish is part of a large shoal.

The Zebras are incredibly resilient and make excellent choices for beginners. However, zebra Danios do not grow beyond 2 inches long and need at least a 10-gallon tank with some fast-moving water.

White Cloud Mountain Minnow is the 2nd nano fish I recommend adding to your aquarium.

If you love tropical freshwater aquarium fish, you might be surprised to discover that you can keep several temperate species.

Also known as White Cloud, these fish are native to mountain streams in China and Vietnam. They were initially found in the White Cloud Mountains, hence their common name.

White Clouds are small, rarely growing more than 1 inch long. They have iridescent lateral lines and bright red-orange fins. This makes them one of the most beautiful freshwater aquarium fish available.

It is exceptionally hardy and will live in a wide range of water conditions.

Note: Always remember to keep them in a group of at least 6.

Dwarf Gouramis are very peaceful nano fish, but you have to keep them in pairs or groups; otherwise, they can become aggressive.

They come from Southeast Asia, but you can also find them in India, where humans have introduced them. They grow up to 3 inches long and need at least 5 gallons of water for one pair or 10 gallons for a group (more is always better).

The Neon Tetra is one of aquarists’ most famous and popular fish. It’s known for its striking blue stripe that starts just behind the gills and runs to the tail.

The exact color of the blue strip depends on the lighting conditions in your tank, but it should typically be a vibrant electric blue.

The rest of the body of this fish is silver-gray with a hint of greenish iridescence on top.

Dwarf Neon Rainbowfish derive their name from flashing rainbow-colored scales. They are one of the smallest species of rainbowfish, growing to just 1 inch long. Their coloration is best seen when they are viewed against a dark background.

They do not have any specific requirements regarding habitat and make great additions to tropical community aquariums with other small peaceful fish species such as the above-mentioned Rummy Nose Tetra or Cherry Barb.

These fish also prefer being kept in schools of at least 10 individuals.

The Guppy is the 6th beautiful nano fish I recommend adding to your home aquarium.

The males are known for their bright colors and long flowing fins, which stream behind them as they swim through the water.

The females are less flashy but still attractive to look at, with a rounder body and shorter fins.

Initially, guppies were found in the natural range of northeast South America. Later, they were added to different habitats and can now be found worldwide.

P.S. Because of guppies’ highly adaptive nature, they can happily live in different ecological and environmental conditions.

Cardinal Tetra fish can grow to about 1.5 inches in groups of 15 to 20. Therefore, you should allow for at least 1 to 2 gallons of water for every Cardinal Tetra in your shoal.

When it comes to fishkeeping, you should never forget that the bigger your home aquarium is, the bolder your fish will be.

They might even overcome their shyness towards larger fish and often come out in the open.

Betta fish are easy to care for as long as you provide them with warm water and plenty of hiding places so they can feel secure.

Your Betta will thrive in a 5-gallon tank or larger where they have room to swim around freely.

However, they are not community-friendly, so you should keep them separate from other fish species.

Which Nano Fish Is Best For You?

The tropical fish hobby is full of too big fish for smaller aquarium setups. However, many nano fish out there will thrive in these tighter spaces.

These fish are often overlooked but should not be. Fish like Bettas and Guppies get all the attention in freshwater tanks, but many other small freshwater species can make great pets.

The definition of what size makes a “nano” tank varies by source, but most agree that anything under 10 gallons is considered a nano tank. These tanks come in all shapes and sizes, from rectangle to hexagon and even square.

While some of these little fish like the Dwarf Gourami will grow to be 2 inches, most of them will stay under an inch. Because of their small size, they do best in small groups, with at least 3-5 of their species.

If you are beginning to keep fish at home or want to start a nano tank, nano fish is a great choice.

They are easy to care for and can live in tanks as small as 5 gallons. With the proper setup, they can live for over 5 years!