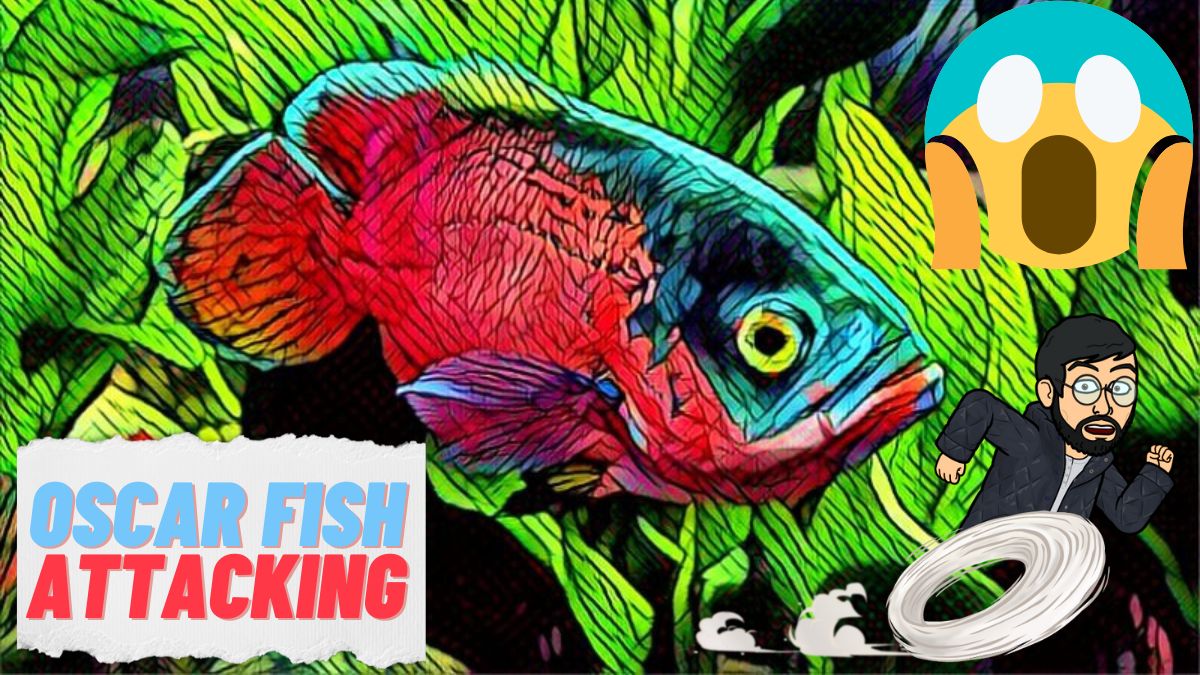 Do Oscar Fish Have Teeth?

Oscars are carnivorous, so they hunt and eat other fish.

To catch and devour their prey, they have pharyngeal teeth—or mouth teeth—on the roof of their mouth.

These modified scales help them crush and dismember their food before swallowing it whole.

The number of these teeth varies from species to species (for example, some catfish have multiple rows of these pharyngeal teeth), but for an average tank-bound oscar fish, there can be about 20.

Why Does Oscar Fish Bite You?

Well, there’s not one but multiple reasons behind an Oscar Fish biting you. Let’s take a look at them one by one:

So why does Oscar fish bite you?

It’s because he’s scared! Suppose you put your hand near him without sudden movements or noises.

In that case, he will likely swim away—but if you startle him by moving quickly or making loud noises (like clapping), he’ll probably bite you as a defense mechanism.

Another reason can be an overcrowded tank.

If too many Oscar fish are in one tank, they will become stressed out, making them more aggressive towards each other and people who come into contact with them.

It is crucial that you keep Oscar tank mates in smaller numbers so that they do not become aggressive towards each other or towards humans who approach them close enough for them to feel threatened by their presence.

Therefore, forcing them to bite you.!

Another reason your Oscar may be biting more often than usual is that there may be something wrong with your tank setup, such as low oxygen levels or, should I say, nitrate Poisoning.

Lastly, the most common reason behind an oscar fish attacking a human can be a lack of training. That’s why when getting an oscar fish, I always recommend going with baby Oscars.

Like any baby tetras, you can train Oscars, so they don’t bite you after growing up.

Are Oscars Poisonous Enough to Kill You?

The fact that an Oscar fish can bite you is True.

And I’ve explained this beautifully over here.

While several species of fish are poisonous, Oscar fish are not among them.

Their poison isn’t deadly to humans, so you don’t need to worry about dying or getting an infection from an Oscar fish bite.

People think that Oscars are poisonous because they have been known to release toxins when stressed out or upset over tank conditions or even human touch.

However, all this doesn’t leave out the possibility of an oscar fish (living in the wild) can’t be poisonous. Unlike an oscar fish in captivity, their bite can have horrific effects on humans.

Do Oscar Fish Recognize Their Owners?

If you start with a baby oscar fish, you can train them to recognize your touch.

However, do not expect an adult oscar fish to recognize you right after you’ve added them to a fish tank.

Besides, if you still proceed, get ready for Oscar’s fish bite.

What Do Oscars Need in their Tank?

When you first bring an Oscar fish home, it’s essential to make sure you have all the necessary supplies for your new pet to live in comfort.

How Big Do Oscars Get?

Oscar fish are large-bodied cichlids that can grow as long as 12 inches.

In rare cases, they can even touch 16 inches.

The average size of an Oscar is about 10 inches long, but larger Oscars can weigh 3 pounds or more!

The average life span of an Oscar fish is between 10 and 20 years, but some have been known to live up to 20 years if they are taken care of properly.

Are There Oscars in Lake Okeechobee?

Oscar fish, originally from South America, are a popular choice for anyone looking to add some color to their home aquarium.

Oscar fish were accidentally brought to waterways and ponds in South Florida when their owners dumped them there after they outgrew their aquariums.

Since then, the Oscars have become abundant in the area and are even caught in Lake Okeechobee.

How Do I Entertain My Oscar Fish?

You can’t just put your Oscar fish in a bowl and expect it to be happy. They need entertainment! Toys are the most acceptable form of entertainment for Oscars.

Ping Pong Balls: These are the best toys for the Oscars. They are cheap, they float around and make noise when they hit the side of the tank, and they’re also safe for your fish to eat if they get bored and decide to snack on them.

Bridges and Tubes: These make great hiding places for Oscars. They can hide in them, swim through them, or try to eat them—which is always fun to watch!

Waterwheels: Waterwheels provide movement in your aquarium, which is essential for keeping your fish healthy by mimicking their natural habitat. It also makes it easy for your Oscar to perch while eating his food pellets!

Aquarium Plants: Aquariums are boring without plants; they make the environment more natural and add oxygen to the water. Oscars love plants that hang down from above so they can hide behind them when they are scared or tired from playing too much with their toys!

Mirror: Mirrors make any fish tank look much more interesting than without one—especially when you have a competitive fish like an Oscar. A small floating mirror can make them alert to fight for their territory.

How Long Do Oscar Fish Live For?

As mentioned here, an Oscar Fish can live for at least 10-20 years.

How Do I Calm My Oscar Fish Down?

There are a few ways to calm your Oscar fish down.

Get a bigger tank

Oscars are large, energetic fish that need lots of room to swim and play. They also like to be able to hide from each other, meaning they need at least one hiding spot in the tank.

If you have an aquarium with multiple Oscars, it’s a good idea to add multiple hiding spots in your tank so they can all get away from each other if they start fighting. You can use driftwood, rocks or cave-like decorations to create hiding spots.

Keep Oscars separate from each other if there are multiple Oscars in the same tank. Oscars can sometimes pick on each other when stressed out, so keeping them separate can help them relax and not feel threatened by another fish in their territory.

Use an Oscar divider with your tanks or ensure that you have enough space between each tank so that one fish cannot get close enough to bother another.

Reshuffle the Fish Tank consisting of Oscars every couple of days so that they don’t get bored with their surroundings and start acting out because of a lack of stimulation from their environment.

You can also redesign your fish tank with new decorations such as rocks or plants, which will give them something new to look at and interact with while making them feel less isolated from other members of their species (otherwise known as “social isolation”).

What Does It Mean When Oscars Lock Lips?

It means that you need to get your fish some lip balm.

Unfortunately, lip locking is typical behavior in cichlids, and it can be unsettling to observe if you don’t know what it is at first.

The display is indicative of a power struggle rather than a mating ritual. As oscar fish is already enormous, this locking lips ritual indicates that they need to expand into neighboring regions.