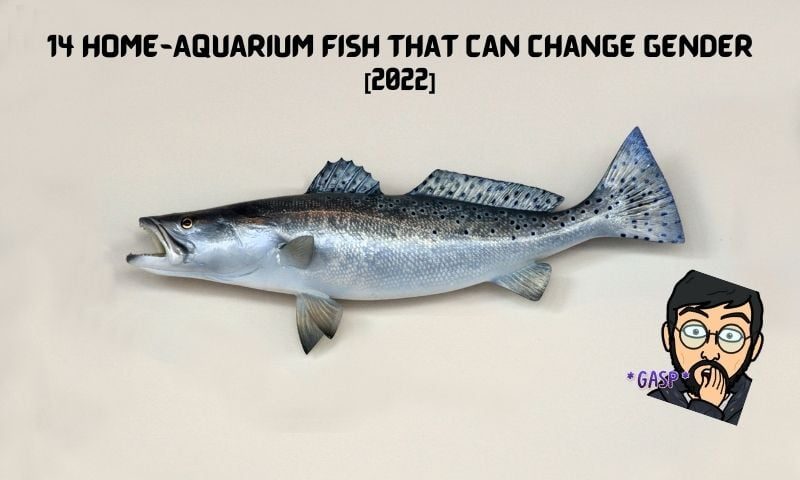 Ever since I started taking fishkeeping seriously, I’ve learned a lot of new things about underwater creatures.

And what I’m about to share with you is entirely bonkers.

There are certain underwater creatures who possess the ability to change their gender from male to female or the other way around the female to male.

If you’ve learned to cater to the needs of pet fish, getting a fish with the gender reversal ability isn’t a bad idea!

So, up next, I’ll share a list of these amusing aquatic pets you can add to your home aquarium. Let’s get started:

In some species of salmon, like chum salmon, the male releases a cloud of milt (semen) into the water, which surrounds the eggs as they are removed from the female.

The sperm remains viable for a short period after being released into the water. In other species, such as sockeye salmon, there is direct contact between males and females during spawning.

A male salmon will approach a female and begin rubbing his snout against hers to remove debris from her body.

He then begins to wiggle his body and move alongside her, depositing sperm as he goes. Many males may surround a single female in this fashion until she has spawned all of her eggs, usually somewhere between 2,000 and 4,000 eggs.

The most well-known synchronous hermaphrodites are the clownfish.

They are protandrous (male first) hermaphrodites, and most of them only mate with other clownfish. Therefore, the group’s largest female (dominant female) will become a male, and the second-largest fish will take over as the dominant female and lay eggs.

The previous dominant male becomes the new dominant female and begins to lay eggs, while the submissive male will become more prominent and fertilize those eggs. This is a case of sequential hermaphroditism.

There are also simultaneous hermaphrodites in which both testes and ovaries are functional at once.

But what about fish?

There are a couple of examples of simultaneous hermaphroditism in fish, but they are sporadic occurrences.

Chalk basses are a species of marine ray-finned fish that belong to the Serranidae family. These small fish, which usually grow up to 3 inches long, are famous for switching from female to male and back again.

When a population of chalk basses does not contain a male of breeding age, the most prominent female will switch genders to become the leader of a group of females. This transition from female to male is called protogyny.

For example, while searching for a mate, a large female may find another female to spawn.

However, if this pair finds another large female with whom to spawn, the first female may switch genders so that all three can reproduce as a group.

In addition, if the most significant male in a breeding group dies or leaves the breeding group, the second-largest member may switch genders and take over his role.

Like all Killifish, the Mangrove Rivulus is only a few inches long. They are usually brown and silver but can also be black, green, and even blue.

The fish have a compressed and elongated body with a large head. They also have an adipose fin on their back.

They are famous for their ability to breathe air and live outside water for 45 days.

This ability makes them well adapted to living on mudflats or mangrove swamps where water levels change dramatically.

The fish’s unique breeding behavior is what made it popular among scientists. The fish lives for about two years, and during this time, they reproduce by self-fertilization.

Female Mangrove Rivulus produce eggs and sperm at different times of the year and use both to fertilize themselves. Their ability to have both types of gametes makes them hermaphrodites.

After fertilization, the female becomes a male by reabsorbing its ovarian tissue. The newly formed male will then protect the eggs until they hatch, which takes approximately 10 days, depending on the water temperature.

The Broad-Barred Goby (Stonogobiops nematodes) is a species of Goby native to the Indian Ocean.

This species inhabits lagoons and seaward reefs with rocky substrates at depths of 2 to 10 m (6.6 to 32.8 ft).

It can reach a length of 7 cm (2.8 in) TL. The Broad-Barred Goby is a peaceful fish that can be kept in an aquarium in pairs or small groups, but they may fight with conspecifics if there is insufficient room or territory.

You can also find these fish species in the aquarium trade.

Broad-barred gobies are hermaphrodites and change into the opposite gender as soon as a goby pair colonizes.

The Ribbon Eel is one of the most attractive and unique eels in the fish-keeping. They are popular because of their unique coloration and fascinating life history. The Ribbon Eel can change from male to female as adults, but this does not frequently occur in captivity.

The Ribbon Eel is found throughout the Indo-Pacific region but rare in the aquarium trade.

They are usually black with yellow accents, but the colors can vary depending on gender, age, and mood!

A Ribbon Eel will start as a male and become a female after reaching a specific size or age; they are protandric hermaphrodites.

The Ribbon Eel will grow nearly 4 feet in length as an adult, so they need plenty of space to swim and hide within their aquarium habitat. They also require live food, such as ghost shrimp or small fish; feed them several times a week.

The largest female becomes the dominant male after it reaches a size of about 30 centimeters in length. The change is prompted by environmental factors such as the overpopulation of females and a deficiency in males.

When this happens, the most prominent female will undergo physical changes to live and act as a male until finding another mate.

One of the significant differences between males and females is coloration. Females are usually orange or brown, while males are mostly blue with black spots on their sides.

There is also an elongated dorsal fin in males absent in females. Males will display for females during spawning season.

The Humphead wrasse is a protogynous hermaphrodite – whose sex changes from female to male. The females are reddish-orange, and the males are bright blue-green.

The strange fish lives in coral reefs around Australia and the Indo-Pacific Ocean. The largest of these fish are about 6 feet long and weigh 400 pounds.

The Bluehead Wrasse is a species of marine wrasse native to the Western Atlantic, including in the Great Barrier Reef. They are known for their fast sex changes, going from female to male.

The Bluehead Wrasse is a small fish that grows up to 30cm (1ft) in length. An adult Bluehead Wrasse can be recognized by its blue head with yellow stripes. The fish’s body is green to yellow with red spots and blue lines along the sides.

Bidirectional gender change is not unique to Hawkfish. Other fish species can change gender, including the hamlet and sex-changing wrasses.

They can change back to females if there are not enough males or a male with too many females.

Also, the female Hawkfish that changes gender doesn’t necessarily become a male for life. Instead, it can switch to females when the need arises, such as when the other male dies or loses some females in the harem.

The lionfish is an Indo-Pacific species that lives in warm reef areas of the Atlantic Ocean, Caribbean Sea, and northern South America. Around one-third of all lionfish can naturally change their gender from male to female.

Barramundi is an Australian freshwater fish also popular in Southeast Asia. It can change its gender to reproduce. All the barramundis are born male, after which some change their gender to female if the female population is low in the area.

They are found in the western Atlantic Ocean and the Caribbean Sea and as far north as Massachusetts and south as Brazil. They live in waters from 1 to 330 feet deep and prefer rocky bottoms or coral reefs.

They are also found in estuaries, bays, and streams. Black sea bass is known for the variety of color patterns within a single population, making it difficult for fishers to identify them. Their diet includes crabs, worms, shrimp, snails, clams, squid, and smaller fish.

The black sea bass is a slow-growing species with a lifespan of up to 25 years. It is thought that these fish can change their gender due to environmental conditions such as a decrease in the male population.

Lyretail anthias is a magnificent and famous marine fish. Also known as lyre-tailed anthias, this fish species is native to the Indian Ocean and the Pacific Ocean.

Lyretail anthias are the lyretail fairy wrasse, lyretail basslet, lyretail grouper, and lyretail hogfish. The males grow to about 5 inches in length, while the females are slightly smaller at about 4 inches.

These colorful little fish are kept in saltwater aquariums by professionals and hobbyists. They can be seen swimming around in small groups and are not fin nippers or aggressive towards other fish species.

The males have a purple body with orange highlights on their dorsal fins, while the females are bright orange. The coloration of these fish changes when they swim among other fish species, and they can even change color to mimic other fish species such as clownfish.

The Lyretail Anthias is a beautiful marine fish popular with beginners and experienced aquarium keepers because of its vibrant colors and attractive body structure. These fish can be found in the Indian Ocean and the Pacific Ocean, where they live in large schools and feed on zooplankton.

With all these options available at your disposal, you need to make the right decision based on other tank mates available in your home aquarium.

Once decided, let me know your choice in the comments section below.

Besides, if you need any help in making a decision, feel free to reach out at [email protected]