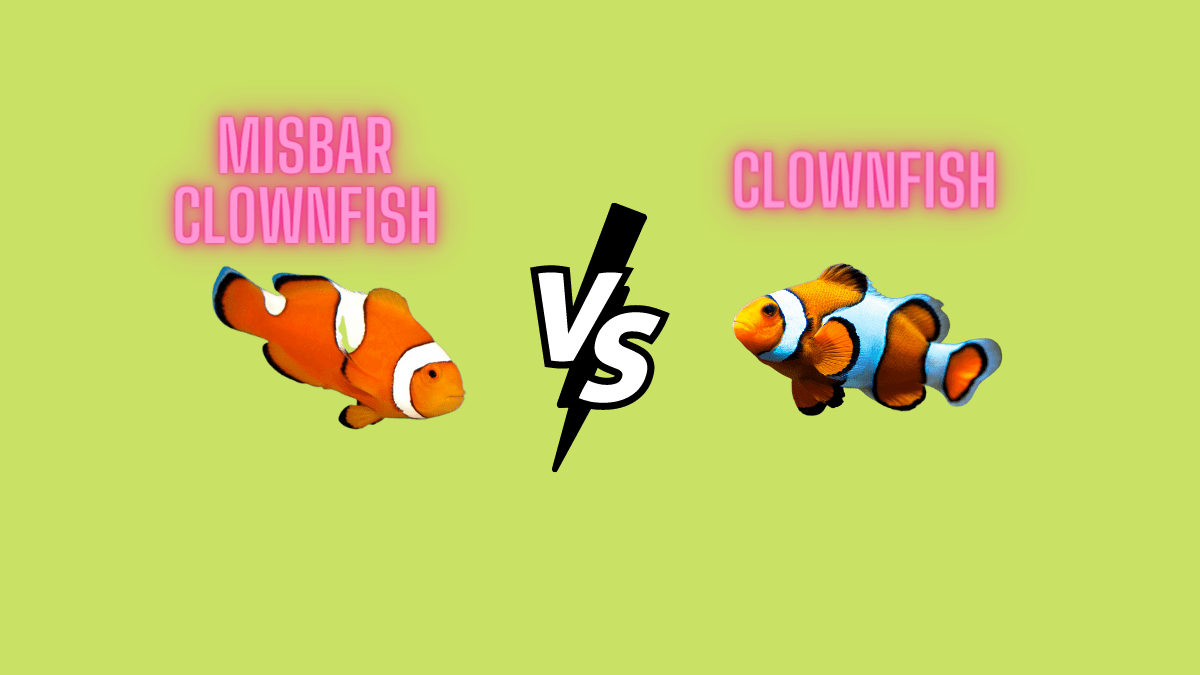 Being a fishkeeper, you might have heard of Misbar clownfish.

Then tell me, have you thought of the differences between a Misbar Clownfish and a clownfish?

Or are there any technical advantages of keeping the Misbar Clownfish over a regular clownfish in your fish tank?

Whatever it is, I’ll use this Misbar Clownfish vs clownfish article to help you differentiate between them.

What is a Misbar Clownfish?

You may have seen a fish with a missing pattern of bars on its body. This type of breeder fish is called the misbar clownfish.

The term misbar refers to the caudal stripe or having an incomplete center stripe.

The misbar is a variant of the regular clownfish and comes in various colors, such as orange, yellow, red, and blue.

Misbar Clownfish is more expensive than the regular one as it’s already rare and unique. One step further, extreme misbar is even rarer than misbar.

But what makes them rare?

The difficulty in artificially breeding them makes them hard to find for fish keepers.

The cause behind this variation lies in genetics: A gene mutation occurred during embryonic development, which resulted in an abnormal patterning on its skin surface instead of having vertical stripes like most other species do.

Misbar Clownfish vs Clownfish – How to Recognize Them?

By looking at their pattern, you can tell the difference between a misbar clownfish and regular clownfish.

The misbar has a regular pattern on the body with no white bars, while the regular clownfish has three white bars: one across its tail, one on its face, and one on its caudal fin.

What Causes Misbar Clownfish to Appear?

The gene that causes misbar clownfish to appear is recessive.

The gene is dominant in clownfish, so the patterning will only be visible if a clownfish has two copies of it.

This means that even though one parent may have this trait, it won’t show up in their offspring unless they mate with another fish.

The patterning will be more visible when an individual is young than when they are older due to their skin stretching as they grow larger.

What is the Lifespan of Misbar clownfish?

The lifespan of misbar clownfish is usually 10 years. However, when kept in suitable water conditions, they can go on to live for nearly 15 years.

If you’re interested in having one as your pet, I recommend you visit an aquarium or other fish store to get more information about them before purchasing one for yourself!

How Many Types of Misbar Clownfish Are There?

There are at least 11 types of misbar clownfish. Here’s the complete list –

What is Bar Patterning in Clownfish?

Bar patterning is a genetic trait. It is a dominant trait, meaning that if you have one parent who has this trait and one parent who doesn’t, all of your fish will grow the bar pattern.

It’s widespread in the fish world and can be found in many species, such as clownfish.

Bar patterning can also be recessive, meaning both parents must have this gene for it to show up in their offspring.

There is no significant difference between misbar and standard Clownfish, except in appearance.

In terms of color, misbars can be many different shades of red. They also come in blue and green varieties.

This is also another reason why Misbar Clownfish in different color combinations are more expensive than their counterparts since there are fewer available for sale due to the difficulty of breeding them and getting them to survive past the infancy stage.

Yeah! The misbar clownfish vs clownfish difference can be distinguished by their appearance.

And if you’re finding it hard to find the difference between them, feel free to reach out in the comments below.

Nitrate Poisoning: How Long Does a GoldFish Take to Recover?