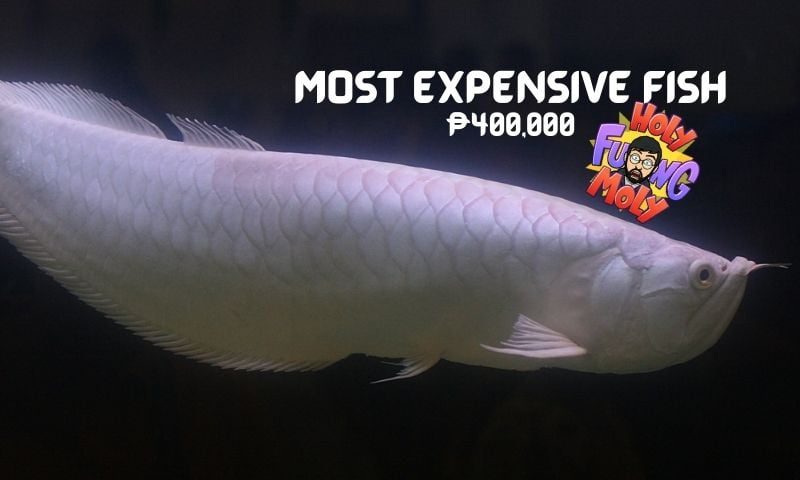 Even though the aquarium fish industry is a well-established business, there are still some scarce species.

Due to either their size, appearance, behavior, or even because they’re trophies, these fish present a hefty price tag that can reach up to thousands of dollars.

The Platinum Arowana is the rarest of them all and the most expensive.

This fish set the world record for being the most expensive freshwater fish at a massive price of $400,000.

The Platinum Arowana is one of several varieties of Arowanas prized by aquarium owners for their beautiful appearance and massive size.

They can grow to a meter in length, so a large tank is needed to house them. But unfortunately, the fish’s ongoing care comes at a substantial cost.

The Polka Dot Stingray (Potamotrygon leopoldi) is a freshwater stingray native to the Xingu River in Brazil and is known for its black spots on a white background.

There are only 30 in the world, and all of them reside in aquariums.

The fish is from the Potamotrygonidae family, containing 65 different rays native to South America.

The Polka Dot Stingray has a flat body with one or more barbed stingers at the base of its tail, which it uses to defend itself.

Each ray can grow up to 60 centimeters long and live as long as 15 years.

While it is typically easy to purchase freshwater stingrays, relatively few aquariums have Polka Dot Stingrays in stock because they have difficulty breeding in captivity and have a high mortality rate at the early stages of development.

In addition, because there are only 30 in existence, it is exceedingly difficult—and expensive—to obtain one.

If you are getting into marine fishkeeping, a Peppermint angelfish is not the place to start.

This is an expensive fish that requires a lot of care and time to maintain.

These fish need a large tank with plenty of live rock, though they do well in groups if enough space is provided.

In addition, their diet should be supplemented with algae-based foods and meaty fare.

The extremely rare Peppermint angelfish (Centropyge boylei) is endemic to the eastern central Pacific Ocean, only known from the Cook Islands, specifically Rarotonga.

This species is easily recognized by its bright orange body with three vertical white stripes.

The first stripe begins at the snout and extends to the front of the dorsal fin, where there is a short orange bar.

The second stripe runs from the eye through the middle of the body and ends on the caudal peduncle.

The third stripe begins below the eye and ends on the caudal peduncle just anterior to the orange bar.

There are also two small, white spots between each eye and on top of the caudal peduncle.

The Peppermint angelfish has a maximum reported length of 3 inches (8 cm) but usually reaches 2½ inches (6 cm).

It’s not just that this fish is rare in the wild, making it so expensive.

Its body is white with a black mask around its eyes, and it has black vertical stripes running down its body.

Masked angelfish are common in the wild and relatively widespread, but commercial fishing of the species is banned by federal law.

In addition, they can be challenging to keep because they are susceptible to changes in water quality. And they are territorial – they must have a large aquarium all to themselves.

The masked angelfish grow to a maximum length of around 5 inches (13 centimeters).

The Bladefin Basslet is a small saltwater fish part of the Serranidae family.

This family consists of many different basslets, but the Bladefin Basslet is one of the most striking members due to its vibrant colors and small size.

The average Bladefin Basslet will grow to around 1.5 inches total length, so these fish should be kept in a reef tank of at least 30 gallons capacity.

Unfortunately, they are found in deep waters, usually over 150 feet, making them extremely difficult to collect.

The Bladefin Basslet has a black body with bright yellow fins and tail and a red stripe that runs down its side.

The Golden Basslet is a deep-water reef fish typically lives around 120 meters below sea level.

Because the temperature at this depth never wavers from 22°C (72°F), this species does not survive well when transported over relatively short distances, so they are rarely available on the live fish market.

The Golden Basslet has an elongated body with a golden coloration adorned with bright blue spots.

It’s an active fish that can grow up to 6 cm (2½ in) long, and as such, it will thrive best in a large aquarium with plenty of free space for swimming.

This species is known for its peaceful temperament and can be kept alongside other similar-sized species (of course, except aggressive tankmates).

Golden alligator gar, also known as the albino alligator gar or the yellow gar, is a rare and beautiful type of gar that is highly prized by anglers for its unique appearance.

However, despite their rarity, these fish aren’t endangered – although they are protected from overfishing in some states.

You can rarely find them in the wild.

That’s because although it can be found in some regions of Texas, Mississippi, Georgia, and Florida, it isn’t expected.

Only about 1 in every 1,000 gars will have the all-gold coloration of the golden gar.

They have black eyes and golden skin – an uncommon color morph caused by a genetic mutation known as xanthism.

Golden gars are long-lived and slow to mature.

The Platinum Alligator Gar is a rare, highly sought-after species of gar.

These fish are a silvery gray color, with an elegant and streamlined body that lacks the traditional plates along the back of most gars—a rarity in the aquarium hobby but a prized catch for any serious collector.

For that reason, you need to provide them with a spacious tank with plenty of oxygen near the surface – they need to come up to breathe from time to time.

Like other members of the Serranidae family, the Neptune grouper is quite aggressive and should not be kept with smaller or more docile fish.

Many hobbyists report that the Neptune grouper gets along well with other large, aggressive fish and even with sharks or rays as long as they are added to the tank at the same time.

However, this species can become territorial as it matures and should be kept only with larger tankmates (over 8 inches) that will not be intimidated by its aggressive behavior.

For example, keeping this species with angelfish may lead to harassment from the Neptune grouper.

The Australian Flathead perch is also known as the Orange-fringed flathead or just Orange flathead.

This species has an attractive orange body with light blue vertical stripes and spots on the lower half.

The Wrought Iron butterflyfish is generally considered one of the most beautiful tropical fish species.

The main body has shades of greenish-blue and silver.

Black markings cover the face and fins, and the eyes are a deep yellow color.

There is also a black patch on the rear of the dorsal fin that makes it look like an eye when viewed from behind, giving this species some protection from predators.

The Wrought Iron butterflyfish is not endangered; however, it’s very rarely seen in aquariums due to its size and difficulty for aquarists to keep them alive.

With their beautiful orange-and-blue coloring, Clarion angelfish are one of the most striking fish in the hobby.

Starting at around $2,500, these costly saltwater fish can live for decades—if you can afford to feed them.

Clarion angelfish (Genicanthus bellus) are found only in the Gulf of California and around the Mexican island of Clarion.

The species was first described in 1971 by Rosenblatt and Bailey, who named it after its type locality: Clarion Island. They inhabit shallow reefs to about 200 feet (60 meters) in the wild.

They are also found in deep caverns and caves on these reefs.

Clarion angelfish have an elongated body with a rounded snout.

Their bodies are predominantly orange, with blue outlines on their scales and fins.

Juvenile fish have a black spot near their dorsal fin, lost when they reach sexual maturity at about 5 inches (12 cm) long.

The sexes are easily distinguished from one another by observing the location of a vertical black stripe that runs down just behind their gill plates.

This stripe is located behind the gill plates on males, while on females, it is located just above them.