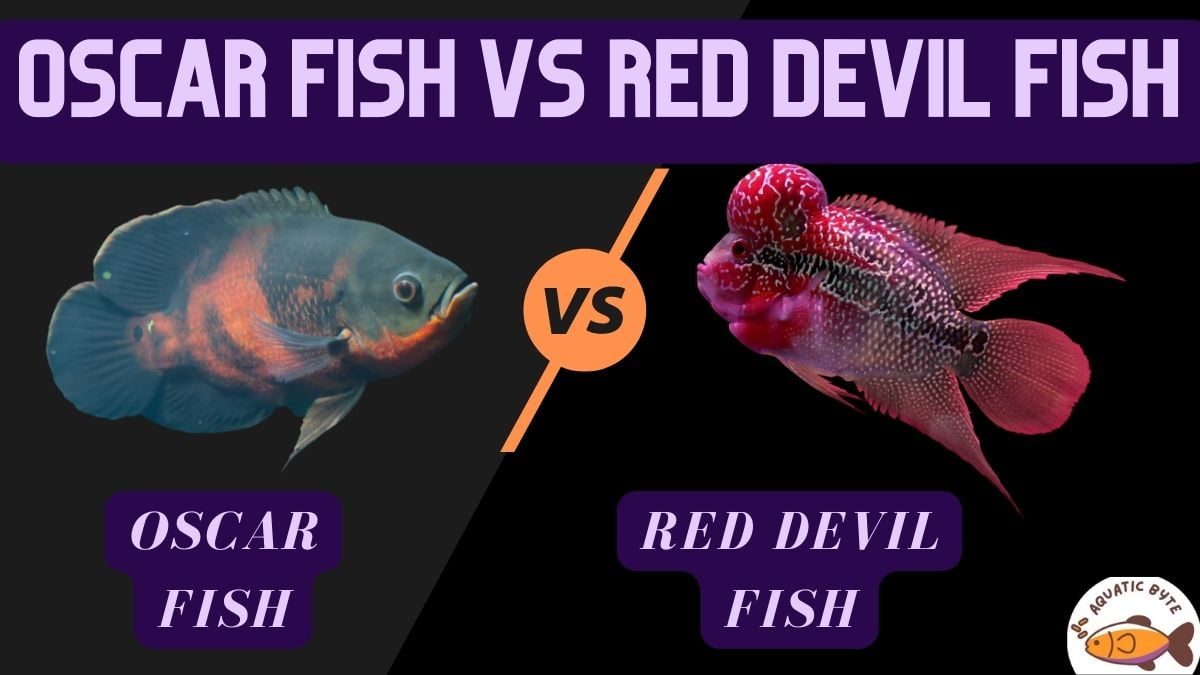 Picking a fish for your home aquarium is not as easy as it sounds, especially when you’ve to choose between Oscar fish and Red Devil Fish.

Both oscar fish and the red devil are known to be aggressive towards their tank mates.

So, if you’re having a problem deciding on either of these fish for your aquarium, you should end your dilemma as I’m about to show you which one’s better for you.

But, before that, let’s get to know some basic information about the Red Devil Fish and Oscar fish:

Aquariums are an excellent way to bring the beauty of the underwater world into your home, and adding fish can bring your aquarium to life.

But before you stock your tank with fish, it’s essential to research to find out which type of fish is best suited for your setup.

As suggested at the start, two popular choices for freshwater fish tanks are red devil fish and Oscar fish, but which one is better for your tank?

Let’s take a closer look at each type of fish:

Red devilfish is a member of the cichlid family and are native to Central America.

They are one of the largest cichlids, growing up to 18 inches in length, and are known for their aggression.

On the other hand, Oscars are native to South America and only grow to be about 1 foot long.

Compared to red dragon fish, Oscars are relatively peaceful species until they turn territorial for their place in the home aquarium.

Both red devilfish and Oscars make good candidates for freshwater aquariums, but there are some differences that you should be aware of before making your final decision.

For example, red devilfish require a larger tank than Oscars because of their size. They also need more hiding places and decorations in the fish tank. So, for that purpose, here’s a list of 10 must-have accessories for your oscar fish tank.

But before that, let’s compare the differences and similarities between them.

Do Oscar Fish Have Teeth? Can They Be Used to Kill You?

But which one is better for your tank? Here are some differences and similarities between these two fish to help you decide:

Color: You can get red devil fish in white, yellow, and bright red color, whereas an Oscar Fish in dark green or brown with orange, red, or yellow splotches.

Temperament: These fish can be aggressive enough to eat theFir tank mates. But in terms of temperament, Oscar fish can beat red devil fish as they’ll eat anything you feed them and can live peacefully with some recommended tank mates.

Whereas red devil fish will eat its tank mates if given any chance. So, that’s why they might not be the best choice if you have other peaceful fish in your tank.

Care: Both of these fish are relatively easy to care for. They both prefer similar water conditions and can be fed various foods. However, if I’ve to pick between Red Devil Fish & Oscar Fish, I’ll go with the latter.

So, based on these differences and similarities, you can pick either red devil fish or oscar fish as both will look colorful and energetic in your Oscar Fish Tank.

Lastly, it all comes down to your personal preference in terms of which one you choose.

Compatibility is one of the most important considerations when choosing between a red devil fish and an Oscar fish for your tank.

Your one wrong can turn out to be bad for other smaller fish in your tank.

As I’ve already told you, both oscar fish and red devil fish is an aggressive fish, you’ll be playing with fire. They are known to attack their tank mates.

So, keeping the safety of smaller fish, you should always keep them in separate fish tanks.

However, the question remains – which one is relatively suitable to keep in a community tank?

If that’s the case, keep a juvenile oscar fish in your fish tank to avoid any foreseeable aggression issues.

P.S. If you’re looking for a bigger size tank for your Oscar fish or Red Devil Cichlids, here are some of my recommendations –

Red Devil fish and Oscar Fish are the two most popular choices among fish keepers.

And if you can’t keep them together in a tank, it’s better to pick one fish based on their behavior and interaction patterns.

Although both fish comes with their pros. and cons., you should pick a fish only depending on your present tank situation.

Now, look at their behavior and interaction patterns and decide which one may better fit your home aquarium.

The red devil fish is known for being quite aggressive. It’s not uncommon for this fish to fight among its tank mates, even if there’s plenty of food and space to go around.

On the other hand, the Oscar fish is relatively peaceful as they can typically get along well in a group of Oscars and is much less likely to cause problems in the tank.

They’ll only fight when they feel threatened about their place in the tank. And with a little effort, you can quickly stop your oscar fish from fighting.

When it comes to interacting with humans, both the red devilfish and the Oscarfish can be a little bit stand-offish.

The red devilfish is primarily known for being somewhat aggressive towards people, often nipping at fingers that come too close to the tank.

The Oscar fish is generally a bit more curious and may even approach humans at times,

Another critical factor to consider when choosing between red devil fish and Oscar fish is their feeding habits.

Both fish are omnivores, but they have different preferences when it comes to food.

Red devil fish are known to be aggressive eaters and often consume anything that fits into their mouths.

This can include other fish, so they are not always the best option for community tanks.

Oscars, on the other hand, are much more peaceful when it comes to feeding time.

They are typically content with eating pellets or flakes, and they will only rarely bother other fish in the tank.

Another thing to remember is that Oscar fish can grow quite large, so they will eventually need more food than a red devil fish.

If you plan to keep an Oscar long-term, you must be prepared to feed them nutritious food accordingly.

Otherwise, they may begin to starve and become unhealthy.

So, to ensure their better health, I suggest you include mealworms and crickets in their diet.

Tank Maintenance is another significant factor that’ll help you choose between red devil fish and oscar fish for your tank.

If they don’t like the setting of your fish tank, the red devil takes no time in uprooting the plants or other accessories in the fish tank.

Although, Oscars are also a hardy fish. They can be a nice addition to your fish tank if you’ve got a lifestyle to take care of and can’t give your full attention to them.

No fishkeeper likes to see their fish die.

And the best way you can keep them safe and healthy is by taking their health concerns seriously.

This includes being aware of the potential health concerns of each type of fish you’ve added or will add in the future.

So, when it comes to adding red devil fish, there are a few things to be aware of.

In layman’s terms, the red devil can survive for more days without food than an oscar fish.

So, out of the two options, which one should you get for your fish tank?

Firstly, if you’re a beginner, I would strictly recommend you to avoid these aggressive fish.

Instead, you should only go with Easy-to-Handle Tropical Fish for Beginners.

Secondly, if you’ve got no option but to pick between a red devil fish or an oscar fish, I suggest you add a juvenile oscar fish to your tank.

And lastly, if you’re an experienced fishkeeper, you should get a red devil fish.

Although an Oscar fish has a great personality and isn’t picky with food, red devils are a bit less common.

So, I suggest you go with some little red devils and grow them with a list of nutritious food in their diet plan.