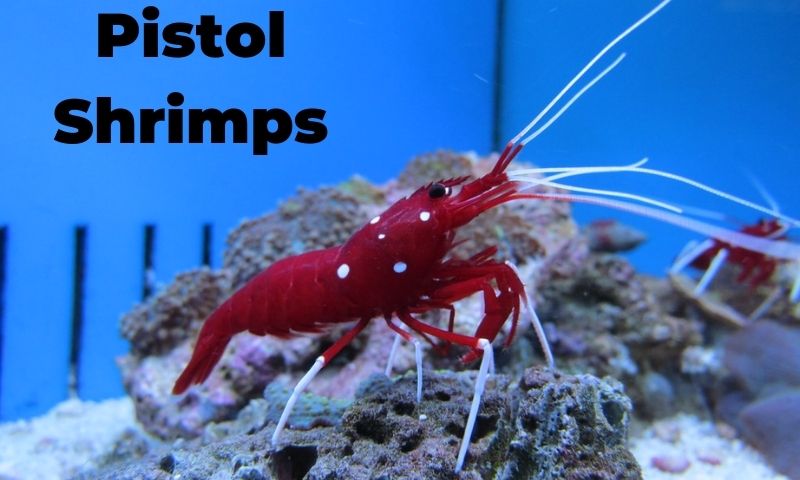 Pistol shrimps are one of the most exciting creatures in the underwater world.

It is named after a unique weapon that can produce a loud sound, like a gunshot or a pistol, to stun its prey and protect itself.

It’s scientifically known as Alpheidae, a family of caridean shrimp.

This species is also called snapping shrimp because they have one enlarged claw that functions like a gun.

And if you’re looking to add pistol shrimps to your home aquariums, you need to be aware of their related facts, diet plans, and bad habits.

The pistol shrimp makes this deafening noise by snapping its claws together at an incredible speed of over 50 miles per hour.

This creates a tiny air bubble that collapses at such a high speed that it generates temperatures as hot as the sun’s surface.

The collapsing bubble also produces shock waves that can stun nearby fish and cause internal damage.

The impact is so powerful that it stuns or kills small fish and any prey close enough to be in the path of these shockwaves suffers internal damage from their cavitation forces.

As if this was not enough, the shockwaves are so strong that they have been known to break glass jars.

Pistol Shrimp is Easy to Recognize Because of Its Snapping Claw

The pistol shrimp or snapping shrimp is a member of the family of alpheidae.

It is also called the Alpheus or alpheids. It has one normal claw and one claw that is very large and shaped like a pistol.

The pistol snap shrimp uses its giant claw for self-defense and hunting.

The larger snapping claw is used to catch prey and for self-defense.

It has two parts – the hammer part moves backward into a proper angle position and snaps into the fixed part.

The powerful sound wave produced by this snap can stun even fish larger than itself!

Pistol shrimp are usually 1 to 2 inches long, but their huge claws can be almost as long as half of their body length.

Pistol shrimp live in colonies in burrows that they dig themselves in sand or mud with their front claws, leaving only their eyes visible at the surface.

Some species of pistol shrimp can grow back lost limbs, but only in a precise way.

This reversibility of claws could potentially explain how this species has survived for so long without evolving much.

Besides being the loudest creature on Earth, the pistol shrimp is one of the slowest moving creatures you’ll ever see.

They move at about 1 cm per second or 0.4 inches per second.

The snapping of the pistol shrimp produces bubbles and sounds that reach temperatures of over 5,000 Kelvin, which is closer to the overall temperature of the sun.

These cavitation bubbles are much larger than expected and produce extremely bright flashes of light – an effect known as sonoluminescence.

The process lasts for no more than 10 nanoseconds and can’t be seen by the naked eye, but research indicates that these flashes are much brighter than before thought possible.

The snapping of the claw is even enough to create cavitation bubbles that implode violently, causing shock waves capable of killing small fish and invertebrates and stunning larger prey such as small fish and worms so that they can be eaten.

Even though this shrimp can kill with just one strike, it is friendly.

Pistol shrimps have a symbiotic relationship with certain species of goby fishes.

The sea creatures live together in the same hole, and both are responsible for keeping each other safe.

So if you plan to put one in your aquarium, it’s a good idea to add a goby as well.

They will spend all their time together, and the goby will keep watch while the shrimp hunt for food.

They Are Mostly Shy.

While they are harmless to humans, they can be deadly to crustaceans and fish if placed in the same tank.

As most tankmates do, these shrimps are generally shy and prefer to be left alone doing their own thing.

They are the First Choice for Cleaning Your Tank.

Because they have this handy feature that allows them to be helpful, people tend to buy red pistol shrimps as cleaners for their aquariums.

When people look for a cleaner for their tanks at home or in offices, they look for something that will live longer and won’t cause any damage to other creatures living inside the same tank.

Red pistol shrimps are perfect for this job because they can survive in most conditions — including fish food.

They are also known not to bother other creatures when placed together in an aquarium or tank.

Most importantly, they don’t need extra care or fancy equipment inside the tank, so you won’t have trouble feeding them.

Fun Fact: Red pistol shrimp can live for about 2 years in captivity.

Never Add These Species Along With Pistol Shrimps.

Pistol shrimp, in particular, is a species that is not suitable for all types of aquariums.

They are best kept inside a reef tank or a fish-only tank.

They are not best kept in a community tank because they might destroy the other fishes and invertebrates by snapping their claws.

Before you plan to have pistol shrimps inside your tank, consider the compatibility of these creatures with other creatures you will introduce in the future.

For example, if you want to add fish or corals to the same tank, consider smaller and more friendly ones because these shrimps could kill them.

In addition, natural predators of this shrimp should not be introduced into the same tank because they will surely kill it.

You should also avoid adding snails and crabs in the same tank with pistol shrimps because they are prey for these shrimps and would be killed immediately after adding them to the same aquarium.

You should also avoid placing this shrimp near anemones, clams, and corals because it might attack them and even kill them.

Is Pistol Shrimp Suitable for a Home Aquarium?

Pistol shrimps make perfect tankmates for many fish species such as angelfish, clownfish, tangs, and many others that are gentle enough not to cause any disturbance to the shrimp.

As long as you remember its unique characteristics, it will be an exciting addition to your aquarium.

Pistol shrimps will only thrive in saltwater aquariums with at least 50 gallons of water and more for larger species such as Alpheus Bellulus, which grows up to 3 inches, reaching the size of an adult hand.

How to Identify Male or Female Pistol Shrimp?

To identify whether a pistol shrimp is male or female, you need to look at the size of its claws.

Females usually have more extensive and more colorful claws than their male counterparts.

In the wild, its diet consists primarily of snails and smaller fish.

However, this won’t be an issue in your tank because neither can be found there.

You can feed it brine shrimps or bloodworms, flakes, and pellets which they will happily munch on.

If they can’t find any food, they will turn to cannibalism and consume each other!

What are Some Bad Habits of Pistol Shrimp?

Pistol Shrimps also come with bad habits such as digging and burrowing in the sand bed, which is not recommended.

Therefore leads to algae bloom and may harm sensitive corals.