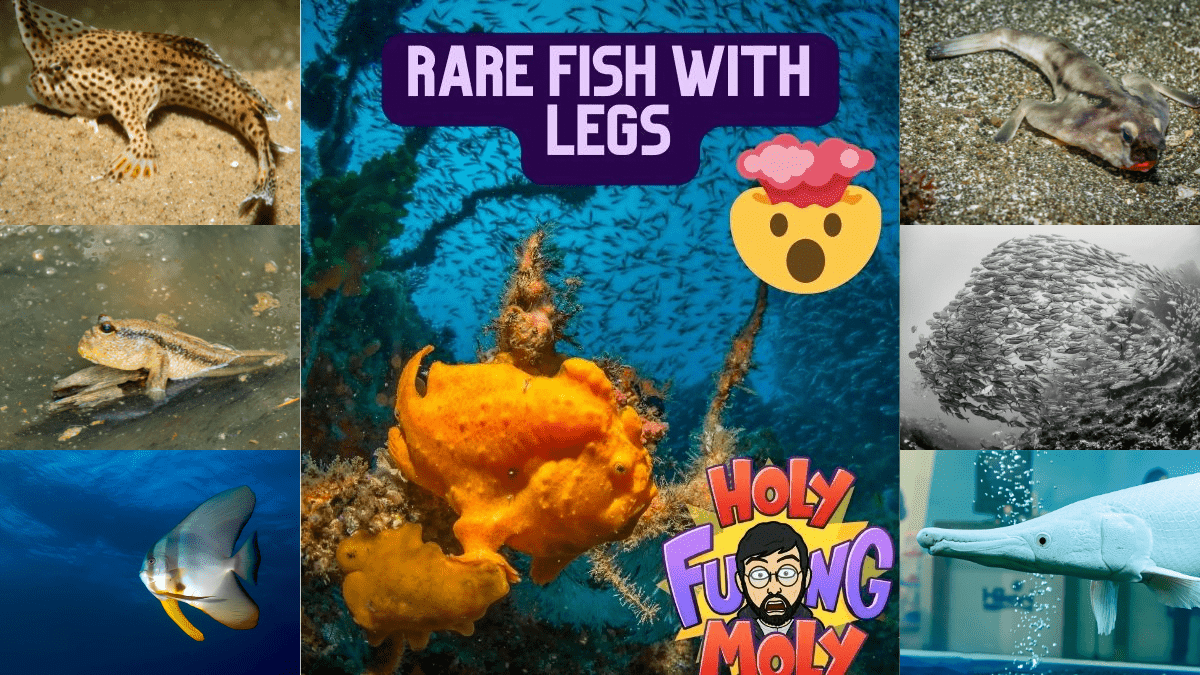 Fish are a fascinating bunch, but most people don’t realize just how diverse they really are.

From snake-like fish to electric eels, there’s more to fish than meets the eye.

And then there are fish that can walk! Here are some of nature’s strangest creatures:

I’m introducing Frogfish as the first fish with legs. This species belongs to the family of Antennariidae.

According to khaolakexplorer, Frogfish are known as Masters of camouflage.

They had to sacrifice their body shape and hydrodynamics in the aquatic world to become masters of camouflage.

Their camouflage happens when they start revealing different colors from –

Handfish are a species of fish that have adapted to life on the sea floor. These unusual fish are found in Australia and New Zealand, burrowing into sandy or muddy areas.

They have no pelvic fins, using their pectoral fins as paddles to move around in the water. The handfish can also use their pelvic fins to push themselves along on the ocean floor when necessary.

Handfish spend most of their time stationary in shallow waters near the shoreline; they live at depths between 6 and 180 feet (1-50 meters).

They feed on small invertebrates such as crabs, shrimp, and worms that live in surrounding vegetation or seagrass beds.

Mudskippers are fish that live in muddy areas of the sea. They have lungs and can breathe air, but they also have fins so they can swim. These fish can walk on land!

However, mudskippers are not very good at walking on land because their bodies are designed for swimming in the water. Mudskippers walk by moving their front fins up and down like fish with legs.

Mudskippers are found in Indo-Pacific, from Africa to Polynesia and Australia.

Batfish are found in the Atlantic, Pacific, and Indian Oceans.

They have flat bodies with large heads, and their color is usually brown or black.

Batfish have long dorsal fins extending from the head to the tail. Batfish can be found in shallow waters, or they can live in deep waters as well.

Panderichthys is a prehistoric fish that was discovered in the early 19th century. It’s also classified as part of the family Panderichthyidae, and it existed during the Devonian period.

Fossilized fossils of Panderichthys were first found in Europe and North America, but other species have been discovered since then.

One exciting thing about this fish is how it walked on its fins! This allowed it to move around without having to swim all day long—it could just walk around like humans do when we go out for a stroll through our neighborhood or town.

Tiktaalik is a genus of extinct sarcopterygian (lobe-finned) fish that lived during the late Devonian period. This fish had sharp teeth and a flat head similar to that of a crocodile.

It was discovered in 2004 in Ellesmere Island, Nunavut, Canada, by Neil Shubin and Ted Daeschler from the University of Chicago, who named it after an Inuktitut term for “large lake.”

The discovery team created this model using CT scanning technology to build up around 300 images into one complete picture.

The fossil skeleton is so complete that you can see even tiny details like scales on its skin or gill openings on its head far away from its mouth!

Tarrasius is a genus of prehistoric fish from the Tertiary period, which was abundant around the globe. There are several species in this genus, one of them being Tarrasius tardus (Taubald).

Taubald is an extinct freshwater fish that lived between 18 and 25 million years ago.

It had four fins and two pairs of pectoral fins; its body shape was similar to that of modern-day ray-finned fishes.

This family’s most prominent known member was Tarrasius Gigas (Gigantura), with a length of up to 1 meter (3 feet).

Leptolepis (meaning “slender scale”) is a genus of prehistoric lobe-finned fish from the Devonian period.

The type species is Leptolepis Serrata, which was about 15 cm long and had two pairs of fins, with the first pair being modified into legs.

It may have been able to use its fins as legs to walk along the ground, or it might have swum like an eel using its second pair of lobed fins on its back.

How to Stop Oscar Fish Fight?

The alligator gar is a species of fish in the Lepisosteidae family.

It is native to the Mississippi River basin, the Gulf Coast region of the United States, and northern Mexico.

In addition to its wide distribution, it has a long history: fossils have been found dating back to the Upper Cretaceous period, which shows it was already present then.

Alligator gar are among the largest freshwater fishes in North America, reaching up to 6 feet (1.8 meters) long and weighing up to 110 pounds (50 kilograms). They can live up to 50 years old and grow up to 4 inches (10 cm) per year!

Nitrate Poisoning: How Long Does a GoldFish Take to Recover?

The West African lungfish is a freshwater fish found in the basins of the Sahel as well as the Guinea and Sierra Leone rivers. It is the only living species in its family, Protopteridae.

The fish can survive without water for months by burrowing into mud or sand and closing off its gills with a membrane. In this state, it breathes air through its four fins (one of which has developed into lungs).

One specimen was kept alive after being dried out for two years by being fed bits of beef, chicken, and pork—and it lived long enough to lay eggs before finally succumbing to old age at age 29!

How Long Can Fish Go Without Food?

The spotted handfish (Brachionichthys hirsutus) is a fish that can walk on land. It lives in the shallow coastal waters of southern Australia, where it has adapted to survive by moving on land when its habitat floods.

The spotted handfish has a flattened body and fins that look like hands. These adaptations help it move around on land by wriggling its body and pushing with its fins.

How to Care for Pregnant Ghost Shrimp (the Right Way)?

If you’ve ever wanted to see a fish with legs, the West Indian Ocean coelacanth might be your best bet.

The West Indian Ocean coelacanth is dark brown, greenish-brown, or gray and often has blotches along its body that may help it blend into its surroundings when hunting for food or avoiding predators.

It has two dorsal fins, one located directly behind its head and another near the tail fin; both are used for propulsion when swimming at high speeds.

How to Clean a Fish Tank?

The warty frogfish is another fish with legs and can walk and live in the deep sea. It is found in the Atlantic Ocean, Indian Ocean, and the Pacific Ocean.

They have bulbous bodies and giant mouths with sharp teeth on their lower jaw. The male fish is usually more colorful than the female one. Their standard length is about 10 to 15 cm (4–6 inches), but some grow to 23 cm (9 inches).

They are also known as “walking catfish” because they use their pectoral fins to walk on the ocean’s bottom instead of swimming as other fish do.

They feed on small invertebrates like shrimp or worms by sucking them into their giant mouths from beneath rocks or coral reefs, where they hide among rocks and corals at depths ranging from 600 meters up to 1 kilometer (3,280 feet) underwater.

Depending on where they live within biogeographic regions where different temperatures occur due to currents moving around these areas at different speeds, you won’t find these walking fishes anywhere else but right here!

How Can Pet Turtles Get Trapped?

Polypterus bichir Lapradei is a species of fish in the Polypteridae family. It is found in Angola and Namibia.

This odd fish can remarkably walk on land for short distances, but it can only do so when significant rains occur.

The species was discovered by French zoologist Georges Cuvier in 1831 and named after his colleague Pierre Laprade.

It can grow to 12 feet long and weigh over 15 pounds, though most adults are closer to 30 inches long at maturity.

Do Oscar Fish Have Teeth? Can They Be Used to Kill You?

The Red Gurnard is a type of fish found in the Atlantic Ocean. It has a long body and a large mouth, with its color varying from red to orange.

It is believed that the Red Gurnard has legs because they use them to walk on land and dig burrows on sandy beaches. This fish can be found at depths of up to 1,000 meters (3,281 feet).

Can Cherry Shrimp and Ghost Shrimp Live Together?

The Sauripterus taylori is a ray-finned fish, placed in the family and the order Amioidei (Perciformes). It has four limbs instead of the fins that most fishes have.

The Sauripterus taylori is endemic to Lake Denison in Australia and Papua New Guinea (Laver 1993).

Can Betta Live With Cherry Shrimp?

The Epaulette shark is a species of bullhead shark that can be found in the western Pacific Ocean. It lives at depths of 5 to 50 meters and is a bottom dweller, meaning it spends most of its time on the ocean floor.

This shark gets its name from the unique markings on its dorsal fins, which look like epaulettes (the shoulder piece on military uniforms).

The lungfish is one of the strangest creatures in the world. They can breathe air and walk on land, have fins like other fish, and have lungs that allow them to breathe out of water.

The lungfish is not an actual fish because it lacks scales and a swim bladder. It has two lobes on its tail fin that act as paddles when it walks around on land.

The lungs are located near the head region of this animal, making it easily accessible for them to breathe in air at all times, even when underwater!

While most people think that the eel is a long snake-like marine creature swimming in salty water, there’s an animal called an eel-like catfish that looks like an eel but lives in freshwater instead!

Besides living in saltwater and freshwater environments, these catfish can also crawl out onto the land with their front fins acting like legs while holding onto rocks with other appendages on their bodies called barbels (which help them feel around underwater).

9 Celebrities With their Fish Tank

Last but not least, the axolotl is another type of rare fish with legs. Axoloti is a type of salamander and can be found in Mexico.

These amphibians are fish with four legs, two fingers on each hand, and the ability to regenerate limbs. The axolotl has been seen walking up vertical surfaces like walls and glass; this is an example of what biologists call “walking” or “terrestriality.”

As an endangered species, you may not be able to find one in your local pet store. However, if you keep an eye out for them while traveling through Mexico (or even outside of it), you may see these fantastic creatures with their long legs!

So, these are some rare fish With Legs!

I’ve tried my best to give you a good overview of each.

These fish species have been discovered recently or are only known from fossil records but still count as having fish with legs.