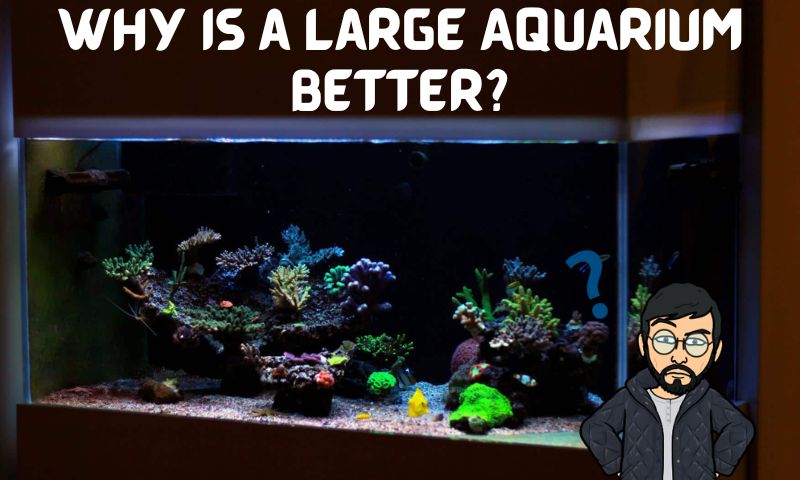 Have you ever noticed that the more you look at large aquariums, the smaller your aquarium seems? I don’t know about you, but I always feel a little heartbroken when I’m at an aquarium store or trade show, and I see a gorgeous tank that is twice (or three times) the size of my own.

While it’s true that having a large aquarium is a bit of a double-edged sword, it’s also true that there are some very compelling reasons why bigger is better. Here are just a few…

You have more space for beautiful aquascaping and decorating

A larger fish tank is much less likely to have water quality problems. But, again, this is because it’s easier to keep the water clean.

Filters don’t matter, because fish have the capacity to generate a lot of waste. Ammonia is one of the wastes that they produce.

Ammonia is toxic to fish and can make them sick or even kill them. You need an oversized enough filter to handle the amount of ammonia produced by your fish. Otherwise, ammonia can build up and create problems for your fish.

Ammonia also builds up as fish waste decomposes on the bottom of the aquarium. Therefore, larger tanks have more bottom area and less ammonia per square inch than small aquariums.

Even if you’re feeding a little more than you should (which you should never do) in a small tank, the extra food will quickly rot and pollute the water. But in a large tank, that same excess food won’t be as big an issue because there isn’t as much waste per gallon of water.

As species of fish tend to multiply the more fish in a container, the water quality deteriorates, which ultimately leads to diseases affecting fish.

So to keep them healthy, we need to keep up with water changes and make sure we aren’t overstocking our tanks.

But what if we had a larger tank? We could keep more fish without increasing our workload…

But how much bigger? The answer is a lot bigger!

If you want to keep twenty inches of fish in your ten-gallon tank, you would have to clean it twice as often to keep the water quality high enough for them to be healthy. This makes work twice as hard – and it’s still not enough! In this case, you would need to clean your tank three times as often – to stay even! And still,

Large aquariums are better because they’re compatible with a wider variety of fish.

Most websites and books give you guidelines that say, “this fish can be kept with this fish.” But, like most guidelines, they’re wrong as often as they’re right.

A great tip to know is that the more space your fish have, the less likely they will fight.

This is called the “fish aggression ratio.” It means that you need one gallon of water for every inch of fish in your tank. So, if you want five inches of fish in a twenty-gallon tank, you need to get four five-inch fish or twenty-one-inch fish instead of four ten-inch fish.

In a large aquarium, the aggression ratio is so low that almost any two species can live together peacefully. For example, in a 75-gallon aquarium, you can keep 12 five-inch fish without any problems. You can even keep a few juveniles or mid-sized predators (like pufferfish) without them destroying each other. It opens up your options when it comes to stocking a tank!

When you have a larger aquarium, you have fewer compatibility problems.

You’ll be able to keep more types of fish and have them live happier lives. This will give you more options. You’ll have more species to choose from and learn about.

And when things do go wrong, there will be fewer fish affected by it. Of course, a tank crash isn’t fun for anyone involved. But it’s much easier to lose 30% of your stock in a 55-gallon tank than in a 10.

Planted tanks are one of the most popular aquatic hobbies today, but they require the aquarist’s dedication. Plants need to be fed, pruned, propagated, and replanted as they grow. Some plants will grow slowly or die off if you don’t have enough light or CO2. If you fail to prune other plants like Java moss and ferns, they’ll quickly overgrow your aquarium.

The larger the aquarium, the more fish and invertebrates you can keep. By keeping the ratio of animals to water volume in balance, you’ll enjoy less maintenance and happier inhabitants.

Aquariums come in all shapes and sizes, but a large aquarium is the best option for fish enthusiast who wants to do their research on aquatic life. Its size allows the owner to perform experiments in it with ease and save on space in their house. Large aquariums also provide a more natural environment for fish, giving them more room to swim and explore.

The truth is that both large and small aquariums can be equally stable if they are adequately managed. In general, smaller aquariums require more frequent water changes because they have a higher surface-area-to-volume ratio, but this can be compensated by using an air pump and an airstone to increase oxygen levels.

As the proud owner of an aquarium, you may be wondering if it is worth the extra money. The truth is, a large aquarium can save you money in the long run.

If you are looking for an affordable way to improve your home décor and save money on maintenance costs, consider investing in a large aquarium.

While both small and large aquariums can be used to create a freshwater planted aquarium or saltwater reef, a large aquarium is capable of housing significantly more fish and plants.

This means you’ll have more options when stocking your tank with fish. For example, you can keep larger species like angelfish or Oscars or smaller shoaling fish like tetras and neon tetras in large numbers.

Of course, this also means you’ll need to buy more equipment such as a larger protein skimmer, sump filter, and powerhead pumps to keep your water clean and well oxygenated. A larger tank will also require more food and supplements.