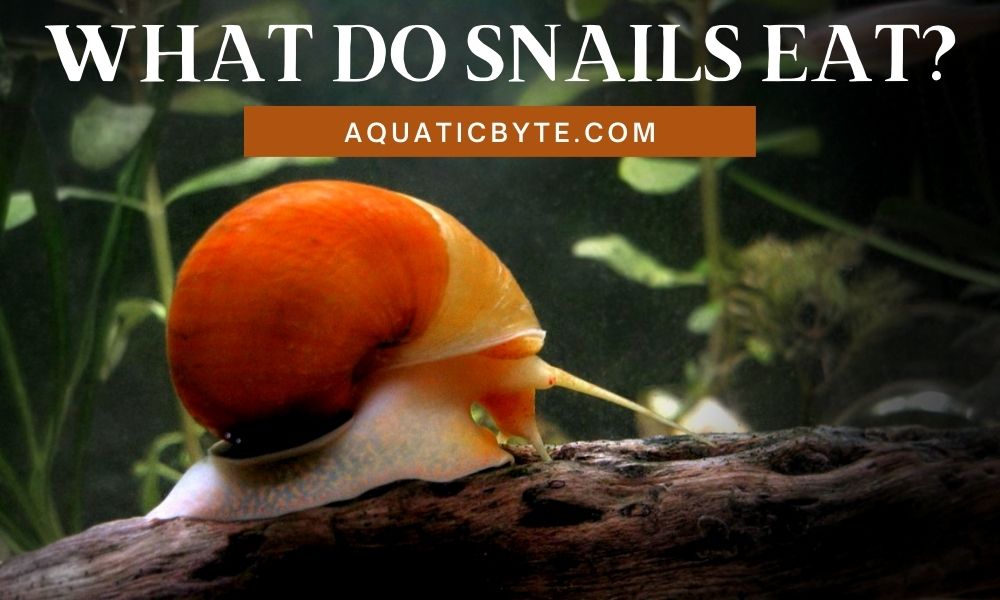 Snails are a great addition to your HOME AQUARIUM. Especially when you’re looking for a pet without a GAG.

And for a beginner like you, this is an all-new guide where you’ll learn to care.

Before you get one, do you know – WHAT DO SNAILS EAT?

And that’s why I’ve thought up to start this blog with the different types of snails for home aquarium & what do they eat to live.

Types of Snails (Based on their Natural Environment)

There are different types of Snails that you can keep in an aquarium or outdoor garden. But their diet depends on where they live.

WHAT DO SEA SNAILS EAT?

So, there won’t be any issue in keeping them in a HOME AQUARIUM.

However, there’s one thing that even had me worried in the beginning.

Can you guess – WHAT?

Based on their living condition, these snails can be either…

And most of the time, the murex snails are considered carnivores.

…to any small animals. They’ll end up eating anything you put in front of them.

However, when getting a snail for your home aquarium, before you do anything else, make sure to find out if it is carnivorous, herbivorous, or omnivorous.

Then only after that decide which food you want to include in their DIET.

WHAT DO FRESHWATER SNAILS EAT?

But first, let me tell you – WHAT DO FRESHWATER SNAIL EAT?

Freshwater Snails eat dead plants & algae in food. By eating out algae, they clean your tank from organisms. That’s great, isn’t it?

NOTE: Even though freshwater snails can eat living and healthy plants. However, the dead plants are their favorite meal.

WHAT DO LAND SNAILS EAT?

Just as the name suggests, some Land Snails are herbivorous who requires live plant parts such as:

✅And fruits in their daily diet.

Not only that, some garden snails even include fungi, mushrooms, and occasional algae (which are freshwater snails’ specific food) into their diet.

NOTE: Some land snails even eat dead plants and animals as food.

WHAT DO BABY SNAILS EAT?

There’s one thing common in most of them – They’re ADULT SNAILS.

What about the time when they are BORN?

What do they eat growing up?

Well, they eat everything just like adults. The only difference is they take food in almost double the quantity.

WHAT DO MYSTERY SNAILS EAT?

Considered peaceful, Mystery Snails are also known as Inca snails who can live for up to 3-4 years. Mystery snails are herbivores who primarily plant-based food.

What do they literally eat?

Most of the time, mystery snails eat algae off any surfaces such as sand or rocks

And when in the WILD, they live on dead & rotting plants.

When compared with other snails, this one’s known as optimistic scavengers by nature.

Thereby its ability to eat a wide variety of food makes Mystery Snails a suitable choice for a home aquarium.

WHAT DO APPLE SNAILS EAT?

When in captivity apple snails eat fresh fish food pellets, vegetables, or anything else you put in front of them.

Some apple snails aren’t that picky when it comes to eating food. Sometimes they’ll eat frozen food items,  sometimes dead fish or insects in their food.

And at last, some likes to apple snails that it microscopic vegetation grown on the tank walls or roof.

WHAT DO AFRICAN SNAILS EAT?

…are some leafy greens, African snails like to eat.

However, before you feed them to your snail make sure they are ORGANIC.

Alas, free from fertilizers and pesticides.

WHAT DO SLUGS AND SNAILS EAT?

GASTROPODA or most commonly known as Snails and slugs are specialist species that eats:

And anything else put in from of them.

Now that you know what do snails eat, it’s time for you to choose the best suitable snails for your home aquarium.

Well, whatever your FINAL DECISION is, do let me know about it.

That’s all for now. If you’ve got any query about getting snails for a home aquarium then shoot them down in the comments section given below.